Originally developed as a pharmaceutical drug for pain management and treatment of cancer, due to morphine-like properties, euphoric effects, and low cost, Fentynal was quickly manipulated and illicitly manufactured as a street drug. Fentanyl, which is 80-100 times more potent than morphine and 50 times more potent than heroin, has a similar look/feel to heroin and other drugs. Frequently added to heroin, cocaine, and methamphetamine to increase potency or disguised as those drugs entirely (mainly because it is cheaper, and thus more profitable). Unfortunately, many users are unaware when these drugs are laced/replaced with fentanyl, often leading to overdose deaths. Due to the potency of the drug, even in small doses, fentanyl can be deadly.

While the global drug problem has been on the rise for the last decade, the COVID-19 pandemic shut-downs have also been linked to increases in overdose deaths over the last two years. With the disruption of transportation routes, and increased efforts to turn a quick profit, Mexican cartels and domestic manufacturers are producing large amounts of synthetic opioids, mainly fentanyl.

“Mexican cartels and major drug trafficking organizations have been taking advantage of this time and flooding our country and our local communities with this horribly deadly drug,” said Jarod Forget, Special Agent in Charge of the DEA’s Washington Division.

According to the DEA’s Public Information Office, posted on February 16, 2022, “the U.S. is seeing overdose deaths climb at an alarming rate, especially those caused by the synthetic opioid, fentanyl. Only weeks ago, the DEA reported overdose deaths in the U.S. had topped 100,000 for the first time over a 12-month period ending last spring”. This is just shy of a 400% increase since 2001.

The American Medical Association released a brief stating “The nation’s drug overdose epidemic continues to change and become worse. One prevailing theme is the fact that the epidemic now is driven by illicit fentanyl, fentanyl analogs, methamphetamine, and cocaine, often in combination or in adulterated forms.”

Additionally, because of the pandemic people have been more isolated than ever. With a 25% increase in anxiety and depression, people are more willing to “experiment” during tough times. Even though they may not have a substance abuse disorder. Especially teens.

Over the last couple of years, there has been an alarming increase in reports related to fentanyl overdose deaths in teens, with doctors seeing victims as young as 14. There have also been numerous reports of police officer and K9 injuries and even deaths from accidental exposure.

As many are calling for policymakers to take action, there are steps our local Law Enforcement Officers can take to ensure the safety of their fellow officers, and our community.

How To Protect Against Fentanyl Exposure

If fentanyl is identified to reduce the risk of exposure/overdose, first responders should:

Turn to Lightsense Technologies for The Most Accurate And Easiest Handheld Fentanyl Drug Detection Device, The DrugDetect – F1

While fentanyl test strips are an effective low-cost option, there are some drawbacks, including:

Additionally, gas chromatography machines can determine if fentanyl is present in certain quantities. However, they are often too large to operate easily in the field. Scans may also need trained personnel to interpret the information.

Handheld devices are often the optimal choice for easy, lightweight, risk-free detection. That is where Lightsense Technologies comes in. 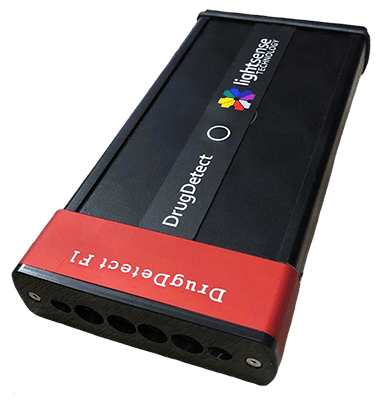 Lightsense Technology, a pioneer in multi-spectroscopic solutions for public health, announces the launch of the DrugDetect platform for law enforcement, enabling Law Enforcement officers to be safer and more efficient in their job.

Lightsense has developed a groundbreaking multi-spectral technology platform. This patented “Enhanced Photodetection Spectroscopy” (EPS) is a radical new spectroscopy architecture, for chemical, molecular, and pathogen identification. Embodied in our small but capable new platform technology for the detection of illicit drugs. Lightweight and easy to use, this point-and-shoot detector: is designed, built, and calibrated in the USA.

The DrugDetect platform is easy to operate with high levels of accuracy at an inexpensive price point. By pointing the scanner at a suspected substance (even through thin transparent bags), the detector will show whether there is a prosecutable amount of a specific drug present or a trace amount that warrants continued search.